The largest container ship in the world!

Along time, it was not at all hard for the specialists in transports to realise that the price of the transport becomes smaller once the container ship becomes larger.

The big transport companies speculated immediately the need and as a consequence, after while no later than November last year was launched the biggest container ship (CSCL Globe),  in January this year it was already established a new record in the naval transport field, MSC Oscar becoming world’s largest container ship, with a capacity of 19 224 TEU (20-foot equivalent unit). TEU is a rather inexact measurement of the cargo capacity usually used to describe the capacity of naval containers and it’s based on a volume of 6,1 m (20 foot) length and 2,44 m (8 foot) width, under the form of an intermodal container.

With a deck as large as four football fields laid end to end, 396 m length and 59 m width, and a capacity of over 19 000 containers, MSC Oscar is able to transport, for instance, in terms easier to follow, 39 000 cars or 117 millions pairs of sneakers or 1,15 millions washing machines.

What is truly amazing, however, is that the same company, MSC (Mediterranean Shipping Company) plans to launch an identical ship in April this year and it is easy to forsee that MSC Oscar is not going to handle for a long period of time this title. As a matter of fact Mediterranean Shipping Company is the second largest company of transport in the world after Maersk Shipping Line. The experts are expecting, therefore, a ship with a capacity with over 20 000 TEU to soon smash this record. 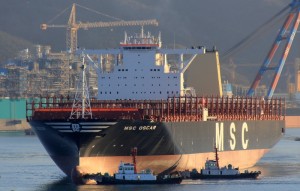 A new concept vehicle by Iveco