The General Transport Master Plan, published on the website of the Minister of Transport, is a document concerning the strategic development of transport infrastructure. It presents and offers the justification of the projects to be included in the Large Infrastructure Operational Programme 2014-2020, for financing from structural funds, as well as for projects included in Connecting Europe Facility Mechanism. Moreover, the General Transport Master Plan will offer the basis for projects that will be implemented after 2020, even though the precise nature of the financing programmes after this year is not yet defined.

The General Transport Master Plan starts from an evaluation of the actual state of the transport infrastructure. Concerning the road connections, Romania is situated at a very low level. The medium circulation speed is 66km/h on the national roads, less with 34% than the target of 100km/h correspondent to the TEN-T system. Therefore, it is proposed an extension of the highway network and its adjunction with express roadways. 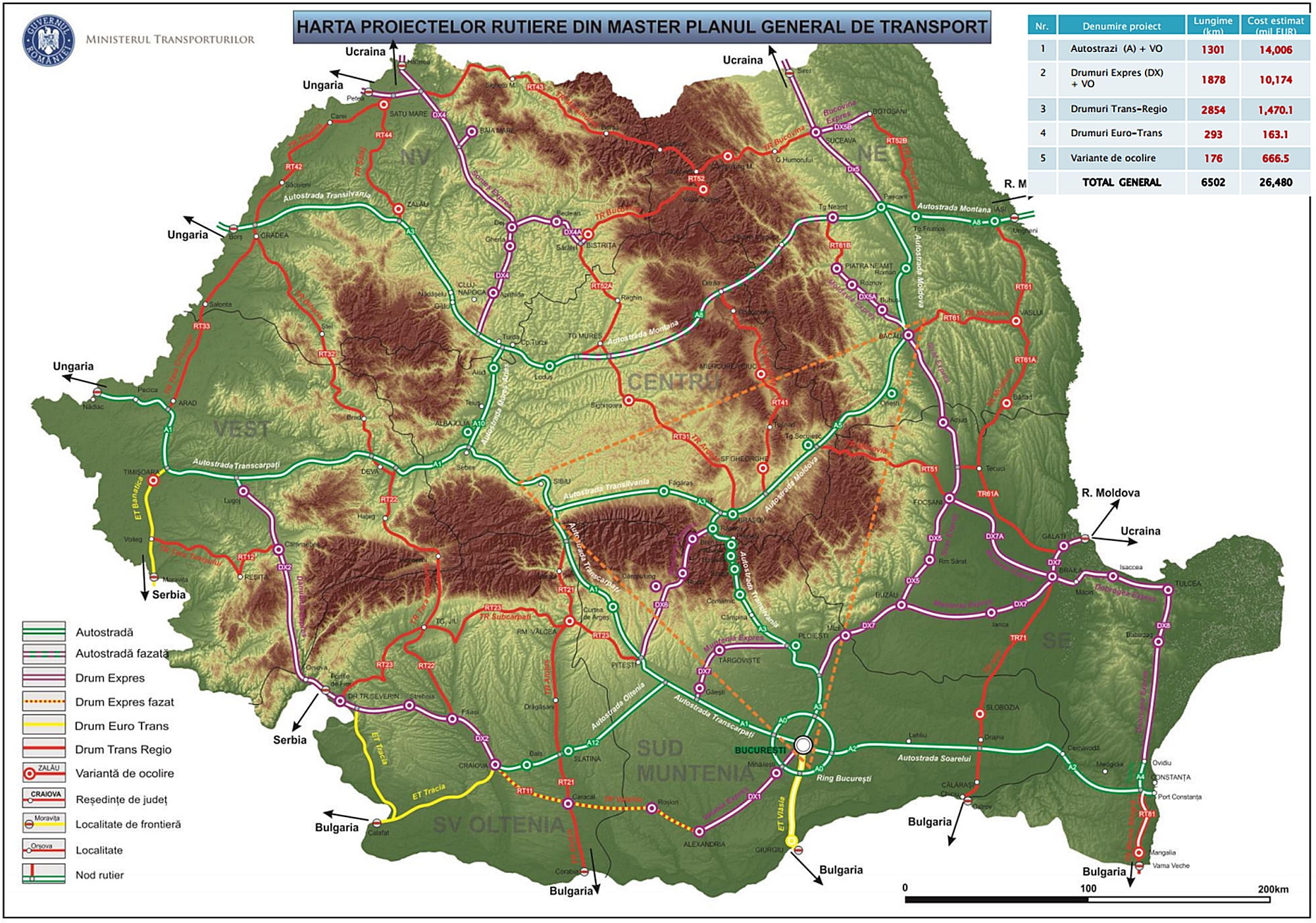 As a general note, concerning the road transport, there is greatly highlighted the need for the development of these express roadways, an option resulted from the lower costs than highways and their efficiency, because they will serve, for the moment, certain very important areas. The express roadways are meant to be constructed in such a way that they can be transformed in the future in highways.

Concerning the highways, The General Transport Master Plan includes the highways Sibiu-Brasov, Brasov-Bacar, Pitesti-Craiova, but also the completion of the Transylvania Highway, from Cluj Napoca to Bors. It is also includes the Sibiu-Pitesti highway, which is practically the single section from the country territory absent from the ex Pan European Corridor IV, a road intensely demanded by the European Commission, as well as by the transporters.

The General Transport Master Plan gives a great importance  to the multimodal transport, with a special highlight on the railway system. At the moment, the degree of containerisation registered by the transports from Romania is far lower than of the other european countries, however it is over that of Bulgaria. Taking into consideration the modern tendency towards containerisation, the dimension of Romania and its potential of transit traffic, the Master Plan concludes that the multimodal transport should have an auspicious future.

The General transport Master Plan was approved by the Government of Romania on the 25th of February 2015 and will be transmitted to the European Commission for fulfilling the ex-ante conditionality, needed when accessing structural funds within the Large Infrastructural Sectorial Operational Programme.